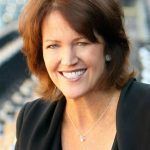 Christine Brennan:
Christine Brennan is an award-winning national sports columnist for USA Today, a commentator for CNN, ABC News, PBS NewsHour and NPR, a best-selling author and a nationally-known speaker. Named one of the country’s top 10 sports columnists three times by the Associated Press Sports Editors, she has covered the last 20 Olympic Games, summer and winter. In March 2020, Brennan was named the winner of the prestigious Red Smith Award, presented annually to a person who has made “major contributions to sports journalism.” Brennan was the first woman sports writer at The Miami Herald in 1981 and the first woman to cover Washington’s NFL team as a staff writer at The Washington Post in 1985. She was the first president of the Association for Women in Sports Media (AWSM) and started a scholarship-internship program that has supported more than 175 female students over the past two decades.
read more

Brennan is the author of seven books. Her 2006 sports memoir, Best Seat in the House, is the only father-daughter memoir written by a sports journalist. Her 1996 national best- seller, Inside Edge, was named one of the top 100 sports books of all-time by Sports Illustrated.
She is a leading voice on some of the most controversial and important issues in sports. Her USA Today column in April 2002 on Augusta National Golf Club triggered the national debate on the club’s lack of female members. In December 2002, Sports Illustrated’s Golf Plus section named her one of golf’s 12 heroes of the year. In August 2012, Brennan broke the news that Augusta National was admitting its first two women members. She also broke the story of the pairs figure skating scandal at the 2002 Salt Lake City Olympics and the Russian judging scandal at the 2014 Sochi Games.
Brennan earned undergraduate and master’s degrees in journalism from Northwestern University. She is a member of the Ohio Women’s Hall of Fame, Northwestern’s Medill School of Journalism Hall of Achievement, Northwestern’s Athletic Hall of Fame and the Washington, D.C. Sports Hall of Fame. She has received honorary degrees from Tiffin (Ohio) University and the University of Toledo. She is a member of Northwestern’s Board of Trustees and a national trustee at the University of Toledo.
Among Brennan’s honors, she was named the 1993 Capital Press Women’s “Woman of Achievement;” named the University of North Carolina’s 2002 Reed Sarratt Distinguished Lecturer; won the U.S. Sports Academy’s Ronald Reagan Award in 2002; won the Jake Wade Award from the College Sports Information Directors of America in 2003; won AWSM’s Pioneer Award in 2004 and Service Award in 2016; was named Woman of the Year by WISE (Women in Sports and Events) in 2005; received the inaugural Women’s Sports Foundation Billie Award for journalism in 2006; won Chi Omega’s 2006 Woman of Achievement Award; won the 2006 Northwestern University Alumnae Award; won Northwestern University’s Alumni Service Award in 2007; received Yale University’s Kiphuth Medal in 2013 and was named the 2013 Ralph McGill Lecturer at the University of Georgia. Both the NCAA and the Women’s Sports Foundation honored her in celebrations for the 40th anniversary of Title IX in 2012./a>

Dr. William Potts-Datema:
Dr. William Potts-Datema has served in education and public health for 40 years, including service from local to international levels. He has held several national leadership positions in the United States including Chief of the Program Development and Services Branch of the Centers for Disease Control and Prevention (CDC) Division of Adolescent and School Health, Director of Partnerships for Children’s Health at the Harvard T.H. Chan School of Public Health in Boston, Massachusetts, and Executive Director of the Society of State Leaders of Health and Physical Education in Washington, D.C.
read more

Dr. Potts-Datema is an adjunct professor in the School Health Education graduate program of Southern Connecticut State University. He also consults for government agencies and national non- profit organizations and is the United States representative for the UNESCO Chair for Global Health and Education.
He serves as President of the Foundation for the Advancement of Health Education, Secretary- Treasurer of the National Parent-Teacher Association (PTA), Treasurer of the Society for Public Health Education, and Vice-Chair of the Missouri State University Alumni Association. He is also a board member of the CATCH Global Foundation, Georgia PTA, National Commission for Health Education Credentialing, and RMC Health. He previously served on the global boards of ASCD and the International Union for Health Promotion and Education; the national boards of the American Association for Health Education (AAHE), American School Health Association (ASHA), and National PTA; and as chair of the national board and a founding board member of Action for Healthy Kids.
He holds a Doctor of Public Health degree from the University of Georgia, and Master of Science and Bachelor of Science in Education degrees from Missouri State University. Dr. Potts-Datema has presented in 48 U.S. states and 12 other nations, and he has authored and contributed to numerous publications. He is a fellow of ASHA and AAHE and a member of Delta Omega national public health honorary society and Eta Sigma Gamma national health education honorary society.

ADA Statement:
The Academy strives to host an inclusive and accessible Summit that will enable all participants to fully engage. To request an accommodation or for inquiries about accessibility, please email Gene White, NAHPL President-elect.
FAQ Events Brochure Membership Contact Us Featured Articles